January 11, 2019 |
By Matt Rodak
Sign up and get updates sent directly to your inbox.

At Fund That Flip, we've funded lots of deals in Pittsburgh (despite the fact that one of our offices is located in its rival city, Cleveland!) and have been impressed with how the city is evolving. Notably, Pittsburgh was one of the finalists for Amazon HQ2, and while they were not awarded the promise of 50,000 new jobs, or even the consolation prize of 5,000 that was bestowed to Nashville, there is still a lot of very positive investment and job growth happening in Steel City.

The first three rules of real estate investing are location, location and location. Many investors are well aware of the positive trends happening in places like Austin, the Bay Area, New York City, Charlotte, Atlanta, Boston and other major metropolitan areas that capture a lot of the headlines of population and job growth. However, there are many other “second cities” that are reinventing themselves around technology, research and development, and biotech, and they will shape the future of business and our modern economy. Pittsburgh is one of these cities with a story to tell, one that many Midwest cities should strive to emulate.


I visited Pittsburgh for the first time in many years in early 2016 and was blown away by the amount of new construction and investment that was happening. Leading the charge were some of the best known names in technology. Google moved into the “'Burgh” back in 2004 in an effort to get access to some of the best computer science minds in the country. Carnegie Mellon (CMU) shares the #1 ranking with MIT, Stanford and UC Berkeley for computer science schools. In 2017, the city's universities reported a 10-year high in new spin out companies, 2x the amount of technology licenses granted and 3x the amount of new patents. Between CMU and the University of Pittsburgh, there has been more than $10B in research funding. In large part because of Pittsburgh's strong education institutions, Google’s presence has grown in the last 14 years to include more than 500 high-paying jobs and is expected to continue to grow.

Following Google’s success, Uber began building a presence in Pittsburgh, basing their self-driving car research and development unit in the city, recruiting some of the top minds from CMU to help build the future of transportation. They now employ more than 1,000 folks holding jobs in high-tech engineering, operations and customer service. Ford has also taken notice and has committed an investment up to $1B over a 5 year period into the Strip District-based Argo AI, a company that is building the software for Ford’s autonomous driving unit.

And it’s not just the big domestic companies and investors that Pittsburgh has captivated. The international investing sensation Softbank recently made a $93M investment in Petuum Inc., a firm that is revolutionizing how companies leverage Artificial Intelligence.

Beyond the well-known firms exists an innovative group of start-ups that are enriching the local community and creating a vibrant technology scene for earlier stage startups. Founded in Pittsburgh, Duolingo, which bills itself as “The best new way to learn a language,” recently raised a round of funding valuing the company at $700M. An IPO may be in the near future, returning capital to the ecosystem for future investment.In fact, according to an Innovation Works and EY study, there has been more than $8.7B of exits in the last 10 years. In that same time, over 450 companies have raised a combined $3.5B in capital. According to the same study, Pittsburgh ranks the 9th best city for venture investment per million residents, just behind Salt Lake City and New York City. 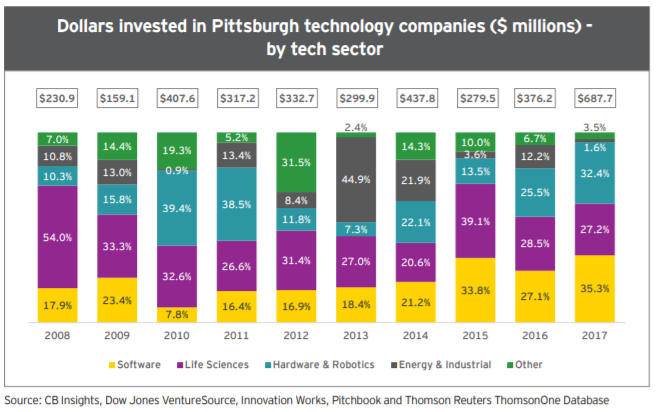 So what does all this mean for demographics and ultimately real estate investing?
The biggest trend is how the population is becoming younger and more highly educated. According to a 2016 Census Study, the city of Pittsburgh had a 23.4% increase in residents aged 25-34. Compare this to a 3.8% increase for the rest of the country, and it's clear the city is growing “younger”. In the same study, they found that the percentage of residents holding a bachelor’s degree increased by 30.9%, compared to 11% for the rest of the country. The city also saw a reduction in poverty rates more than 5 times greater than the rest of the country. Add these up and the result is the city is being populated by a younger, more educated and higher-earning base. 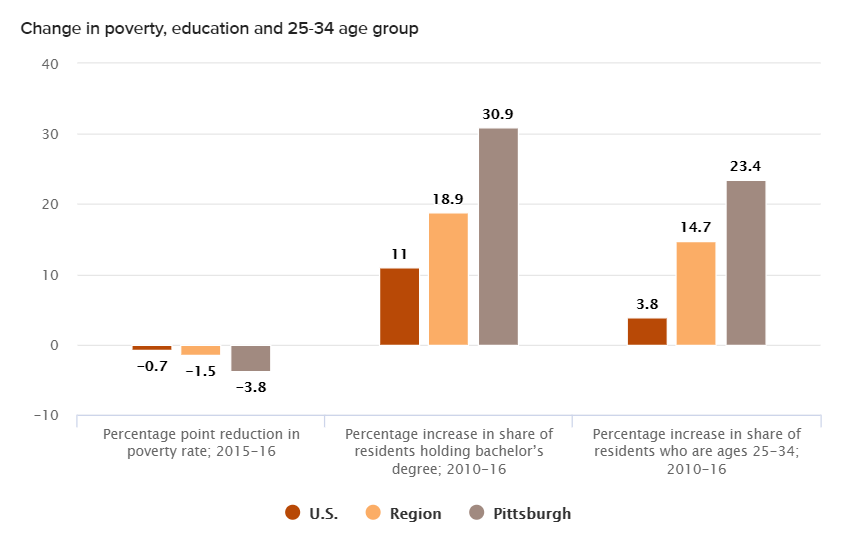 The result of all of this has been a positive trend for real estate values. In the past 5 years, real estate values are up 36%, but the median house price is still under $200,000. Compare this to median house prices in places like New York ($680k), the Bay Area ($935k) and even Austin, TX ($361k), and Pittsburgh offers one of the most affordable places to live, all while offering ample opportunities for high-paying jobs.

To me, this is only half the story. One of the more appealing parts of real estate investing in Pittsburgh is what the infrastructure of the city offers. The city converges around three rivers, meaning that it is somewhat landlocked. If you work in the city, which is where all of these high-tech companies are located, and want to avoid the inescapable traffic caused by the bridges and tunnels, you must live on the right side of those rivers, where land and housing is limited.

Lucky for Pittsburgh residents, the city was very well designed when initially settled. There are some 80 individual neighborhoods within the city limits, each with their own “main street” populated by mixed-use retail and commercial.

There is no better example of this than the Lawrenceville neighborhood. Founded in 1814, this neighborhood has transformed into one of the premier places to live in the city. Coffee shops, bars, restaurants and all the hippest places to shop can be found within walking distance to recently renovated lofts and condominiums.

This dynamic of the city being landlocked by natural barriers, combined with a thriving economy and fantastic mixed-use infrastructure presents real estate investors very attractive opportunities to develop and redevelop the old housing stock to fit the needs of a younger, more affluent demographic brought to the city by the burgeoning technology scene.

This is all to say that we are very optimistic on the prospects of Pittsburgh. While prices are up 36% over the last 5 years, the affordability with mean prices under $200,000 still remains very reasonable considering the rising incomes of a younger, more educated demographic that is defining the future of the city.

We currently have several investment opportunities open in Pittsburgh and expect to do more in 2019. We look forward to taking a small part in the renaissance of this incredible American city!

For more info, or to learn more about our Pittsburgh investment opportunities, email investorrelations@fundthatflip.com, or invest now:

Enter your e-mail below to subscribe to our free educational newsletter.
© Fund That Flip 2020.