June 30, 2021 |
By Hunter Johnson
Sign up and get updates sent directly to your inbox.

With years of rich history and a seamless integration of modern development, Philadelphia has made its name as one of the most fascinating cities in the U.S. Not only is the city known for its historical importance, but it has also made its way to the forefront of educational and economic development as the sixth largest city in the country. Fund That Flip has funded an abundance of deals in Philadelphia, and we look forward to continuing our partnership with those investing in their local communities through real estate.

Beginning in 2006, Philadelphia saw an unprecedented decade of population growth fueled largely by an influx of millennials and a growing immigrant population. From 2000 to 2017, the immigrant population in Philly grew by 59%, making it one of the most diverse cities in PA. Additionally, Philadelphia saw positive growth in many sectors: four-year graduation rates hit an all time high, residents with health insurance grew by nearly a third, and new construction boomed with residential building permits doubling in the past decade in an effort to accommodate the rapidly growing population. However, like many cities, this decade of city-wide positive growth was interrupted by COVID in 2020, and Philadelphia saw many of these positive trends hit a standstill. 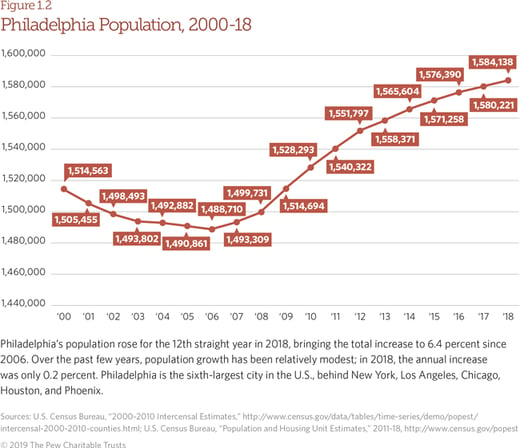 Nonetheless, many in the city were working toward a promising economic recovery from the earliest days of the pandemic, with investors pumping a 165% increase in capital investments into the city near the end of 2020. Consumer spending is currently up 115% from pre-pandemic levels, and with health restrictions being relaxed in the city, these numbers are expected to rise as residents continue to put money back into their local economy. Many attribute the city's high vaccination rates and fiscal stimulus as a driving factor in the city's recovery. In May of 2021, Patrick T. Harker, president and CEO of the Federal Reserve Bank of Philadelphia, reported, “Given that the underlying fundamentals of the economy look so strong . . . I expect job creation to pick up in the coming months.” In another effort to restart economic growth, the Federal Reserve Bank recently launched an online tool that matches those with low-income and unstable jobs with higher paying occupations that match their skillset. This initiative aims to increase reskilling in the city, as millions of workers begin to re-enter the job market after COVID. Finally, with a multitude of “anchor institutions” that increasingly attract millennial migration as well as a prominent tourist industry, Philadelphia’s economic growth and recovery is poised for success.

Philadelphia is home to many successful companies that help drive the economy of the city such as Comcast, Aramark, and Dupont; these are just a few of the Fortune 500 companies based in Philly, amassing over $130 billion in revenue in 2020. Additionally, Philadelphia has often been referred to as an “eds and meds'' city due to the vast network of prestigious hospitals and universities, notably the University of Pennsylvania and its hospitals. These institutions are constantly attracting some of the sharpest minds and top talent in the world, with a whopping 38% of the city's workforce employed in these sectors.

In addition being  only home to big-name companies and institutions, Philadelphia is also emerging as a top city for technology and innovative startup talent, with many of these entrepreneurs hailing from these elite hospitals and universities. With an abundance of resources and a quickly growing tech community, the “innovation district” in downtown Philadelphia has become home to impressive research centers that have funded over $1 billion in federal research dollars. Philadelphia is also home of their very own “Philly Tech Week” event, a week-long celebration of innovation and technology that aims to engage the community and inspire positive change agents throughout the city.

If we take a closer look into the education sector, we can see positive trends that will likely have an impressive impact on the future of real estate in the city. Campus Philly recently released it’s yearly report on education statistics, and the numbers are looking exceedingly promising. As a non-profit aimed towards retaining young talent in the city after graduation, it appears its efforts are paying off; its most recent report shows that 54% of college graduates are choosing to stay in the city, significantly higher than nearby Boston, which lands at 42%. Consequently, Philadelphia’s population of young degree-holding professionals has grown exponentially, up 115% percent since 2000.

The city has also shown its commitment to diversity and equity, specifically amongst the thriving tech community. In November of 2020, a $500,000 initiative was passed that seeks to provide various services to support underrepresented communities and work towards tearing down barriers to entry that often affect minorities in STEM. It is well-documented that diverse workforces benefit everyone involved, with endless data supporting the fact that diversity leads to better performing teams and increased innovation. Philadelphia’s commitment to education and diversity will likely lead to even more higher education retention in the city, further helping drive forward the growing economy and continuing the steady increase of a younger and more highly educated population.

The Philadelphia real estate market is looking promising; post-COVID job growth initiatives and an economy that is determined to bounce back set the stage for positive real estate trends. The renter population in Philadelphia is comparatively high, with 45% of occupied housing in the metro area rented out. An 8% increase in rental applications in 2020 show that the popularity of rental properties is only growing, creating an opportunity for real estate investors to leverage this growth as more recent college graduates search for housing. Additionally, the almost guaranteed influx of young college students every year from nearby universities provides a consistent stream of demand for rental homes. Real estate experts predict that real estate in the heart of downtown should remain strong as  78% of office workers plan to return to work, and the majority workers prefer to live near their workplace.

Historically, housing and rental prices in Philadelphia have remained relatively affordable and significantly lower than comparable cities. Nonetheless, the Zillow home value index for Philadelphia currently sits at $217,485, a 14.1% year-to-year increase from April 2020. As with many markets, low interest rates and supply will likely continue to drive up prices and create a highly competitive sellers’ market. Philadelphia still retains a much lower cost of living and doing business compared to nearby cities such as Boston, New York, and Washington, D.C. The COVID pandemic also spurred a migration movement from large cities such as New York into Philadelphia, as more professionals were granted the ability to work from home and no longer feel tied to the physical location of their workplace, allowing them to save a significant amount due to Philadelphia’s lower cost of living.

A few areas of Philadelphia that are of considerable interest to real estate investors are the neighborhoods of Brewerytown and Fishtown. Brewerytown is the epitome of a town that has it all: access to public transportation and proximity to downtown, new housing developments, and an abundance of retail stores and restaurants that make it a prime location for both young professionals and families. Fishtown, often referred to as “hipster hub,” is a hotspot for art galleries, music venues, and breweries frequented by young artists and students who are often looking to rent. House values in both of these towns have been steadily rising, making these both towns that could be attractive options for investors. 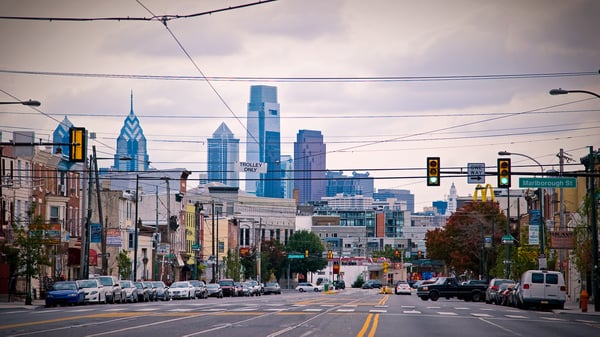 While Philadelphia is still in the midst of recovery from 2020,  we believe the real estate outlook for this city is looking very optimistic; strong post-graduation retention, anchor institutions, and the opportunity for affordable living with big city resources is making Philadelphia an increasingly attractive city for investors.

We are currently funding multiple projects based in the city and recently featured one of our latest new constructions in Philadelphia- check them out below!

For more info, or to learn more about our Philadelphia investment opportunities, email investorrelations@fundthatflip.com, or invest now:

Enter your e-mail below to subscribe to our free educational newsletter.
© Fund That Flip 2021.